While on this trek, besides the scenic beauty of Himalayan ranges you will be visiting the two most revered Buddhist pilgrimage sites in Bhutan, Bumdra and Taktshang Monastery. Bumdra means ‘Rock of One Hundred Thousand Foot Prints’. The legends say that a hundred thousand Dakinis (angels) descended here and left their footprints on the rock 800 years ago. Bumdra is about 3800m above sea level and the Taktshang Monastery is above 3100m above sea level.

Today, we will take it easy to acclimatise to the altitude. Drive to Thimphu, check in to the hotel and lets have your first taste of Bhutanese cuisine and some light sight-seeing in Thimphu if possible.

Viewpoints around Thimphu:
Takin enclosure – See the national animal of Bhutan, the Takin.
National Memorial Chorten – which was built in honour of the late King Jigme Dorji Wangchuk
Centenary Farmers’ Market – Every Saturday and Sunday most of the Thimphu population congregate on the banks of the river where the weekend market is held. Here villagers from the valley and other nearby places come to sell their agriculture products. 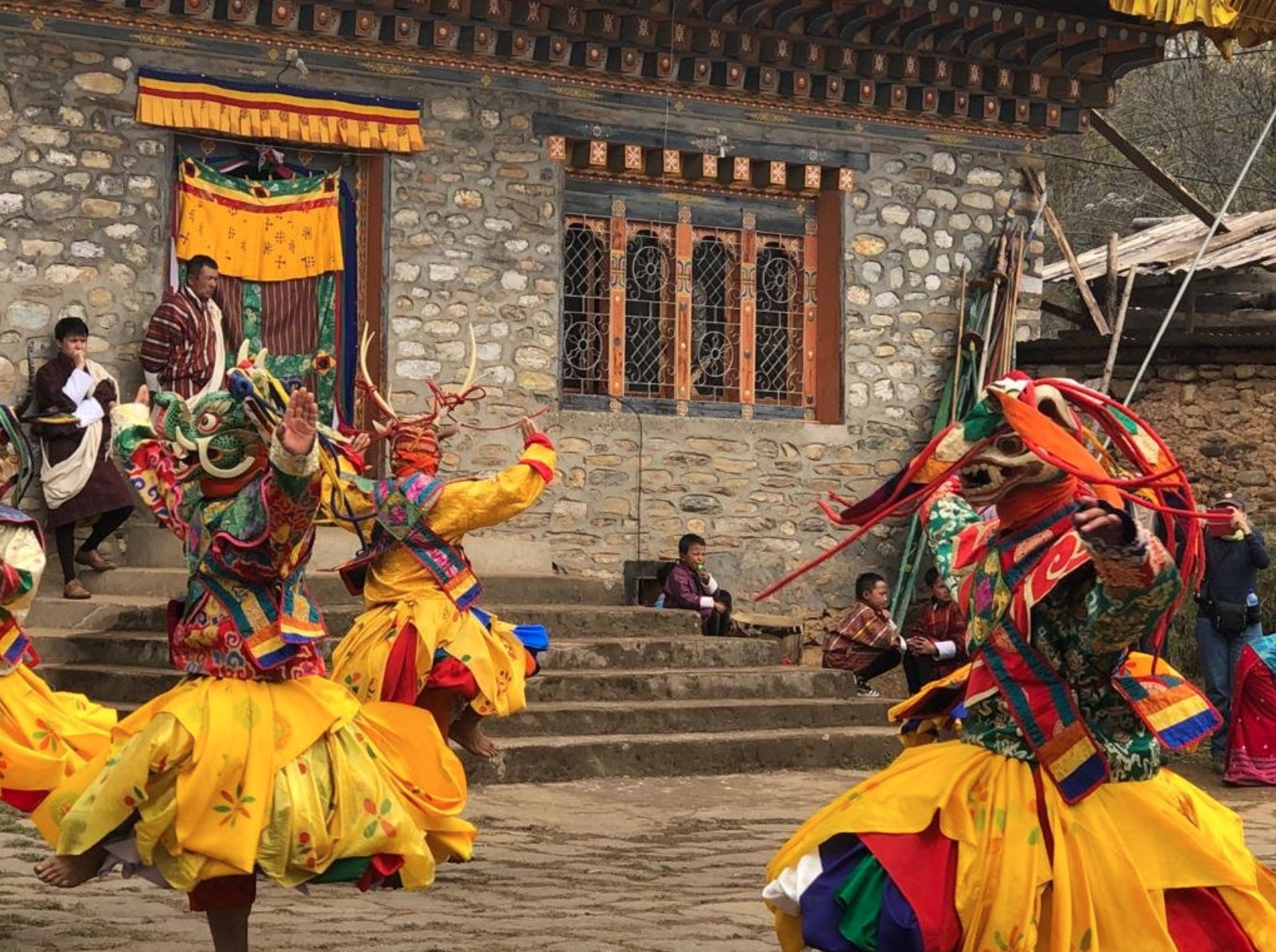 Folk Heritage Museum – Dedicated to connecting people to the Bhutanese rural past though exhibition of artefacts used in rural households.
Textile Museum – witnesses the art of traditional weaving.
Thimphu Tashichhodzong – the largest Dzong, is also the seat of the office of the King of Bhutan.
National Memorial Chorten – which was built in honour of the late King Jigme Dorji Wangchuk.
Paper making factory – witnesses the art of paper making.
Simtokha Dzong – Five miles from Thimphu, on a lofty ridge, stands Semtokha Dzong the oldest fortress in the Kingdom.

Dochula Pass – the 108 chortens was built by the present Queen Mother of Bhutan Ashi Dorji Wangmo Wangchuck to commemorate Bhutan’s victory over Indian militants and to liberate the souls of the soldiers lost.

Punakha Dzong – Built in 1637, the dzong continues to be the winter home for the clergy, headed by the Chief Abbott, the Je Khenpo. It is a stunning example of Bhutanese architecture, sitting at the fork of two rivers, portraying the image of a medieval city from a distance. The dzong was destroyed by fire and glacial floods over the years but has been carefully restored and is, today, a fine example of Bhutanese craftsmanship.

Khamsum Yulley Namgyal Chorten – Built by the third Queen Mother Ashi Tshering Yangdon wangchuck this Chorten is a splendid example of of the Bhutanese architecture and art and is the only one of its kind in the world. It has been built over eight and a half years and its details have been drawn from religious scripture. 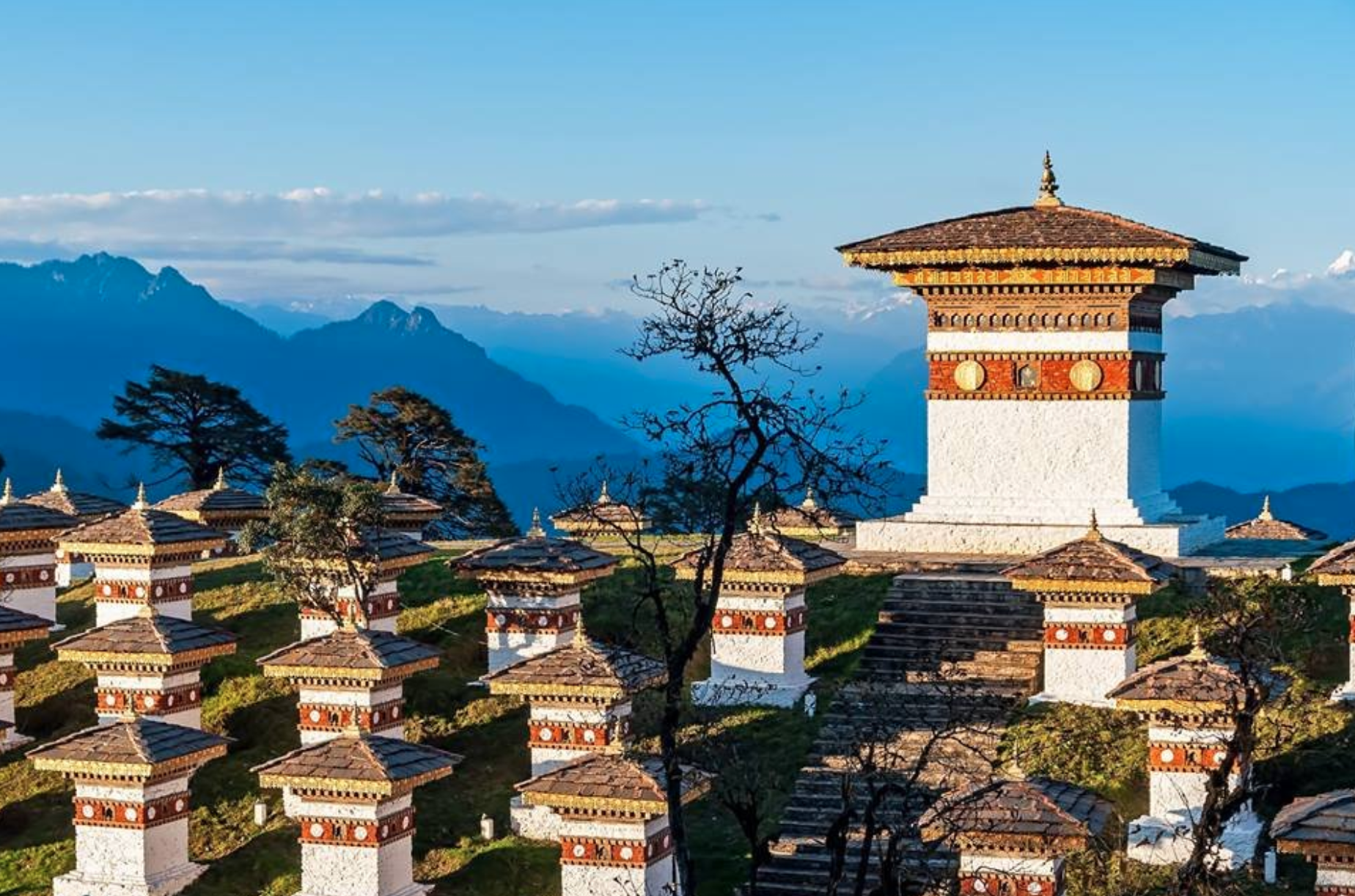 Paro Valley – The beautiful valley is home to many of Bhutan’s old monasteries and temples. The country’s only Airport is in Paro. The valley is also home to mount Chomolhari (7,300 meters) situated at the northern end of the valley whose glacier water forms the Pachu flowing through the valley. The following are some of the prominent places to visit in Paro.

Paro Dzong – also known as Rinpung Dzong, this 15th century massive fortress/monastery, is also the administrative centre of the dzonkhag.

Ta Dzong – Built as a watch tower the Ta Dzong, it was converted into the National Museum in 1968. The museum boasts antique Thangka, textiles, weapons and armour, household objects and rich assortment of natural and historic artefacts. 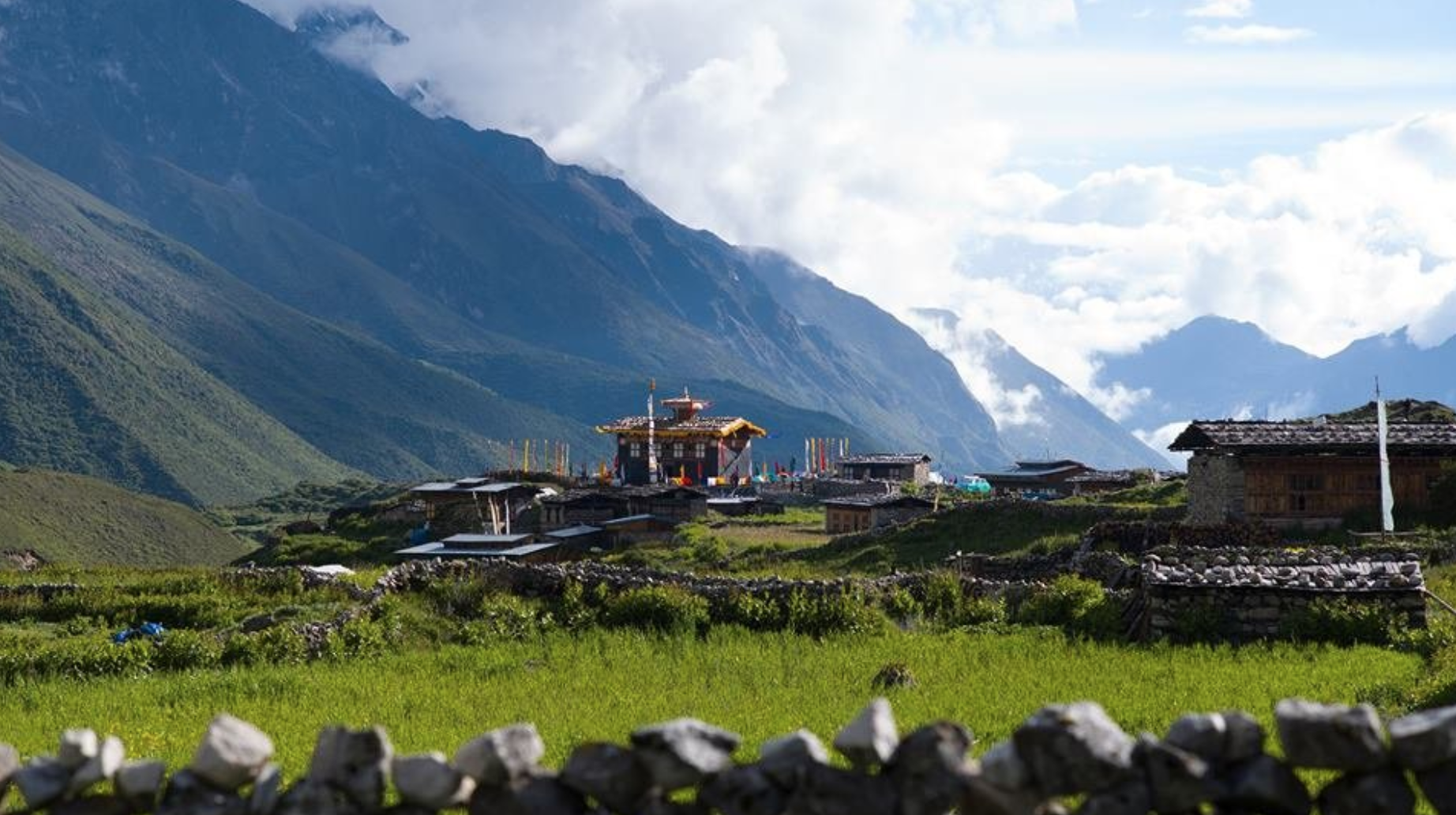 Hike from Sang Choekor Buddhist College (2,800m) to Yak Pasture below Bumdra Monastery (3,800m). The adventure begins with an early morning drive up to the Sang Choekor to meet our ponies and while they are being loaded we may pay our respects at the College. The initial 1–2 hour ascent of a ridge can be steep at times but in cool shade. We will reach a clearing with prayer flags and enjoy a spectacular view of both Paro and Do Chhu valleys.

About 1-2 hours walk away is the Chhoe Chhoe Tse Lhakhang (temple); which nestles at the side of the mountain. The trail continues and when we reach the last steep elevation we will see a temple overlooking the views of Paro airport and the snow-capped Himalaya. After another 20 minutes of climbing through ruins and fluttering prayer flags, we hike into the ancient forest for about 40 minutes before we reach a wide meadow with sacred chortens and prayer flags. We will spend a night at Bumdra Monastery (the cave of a thousand prayers). 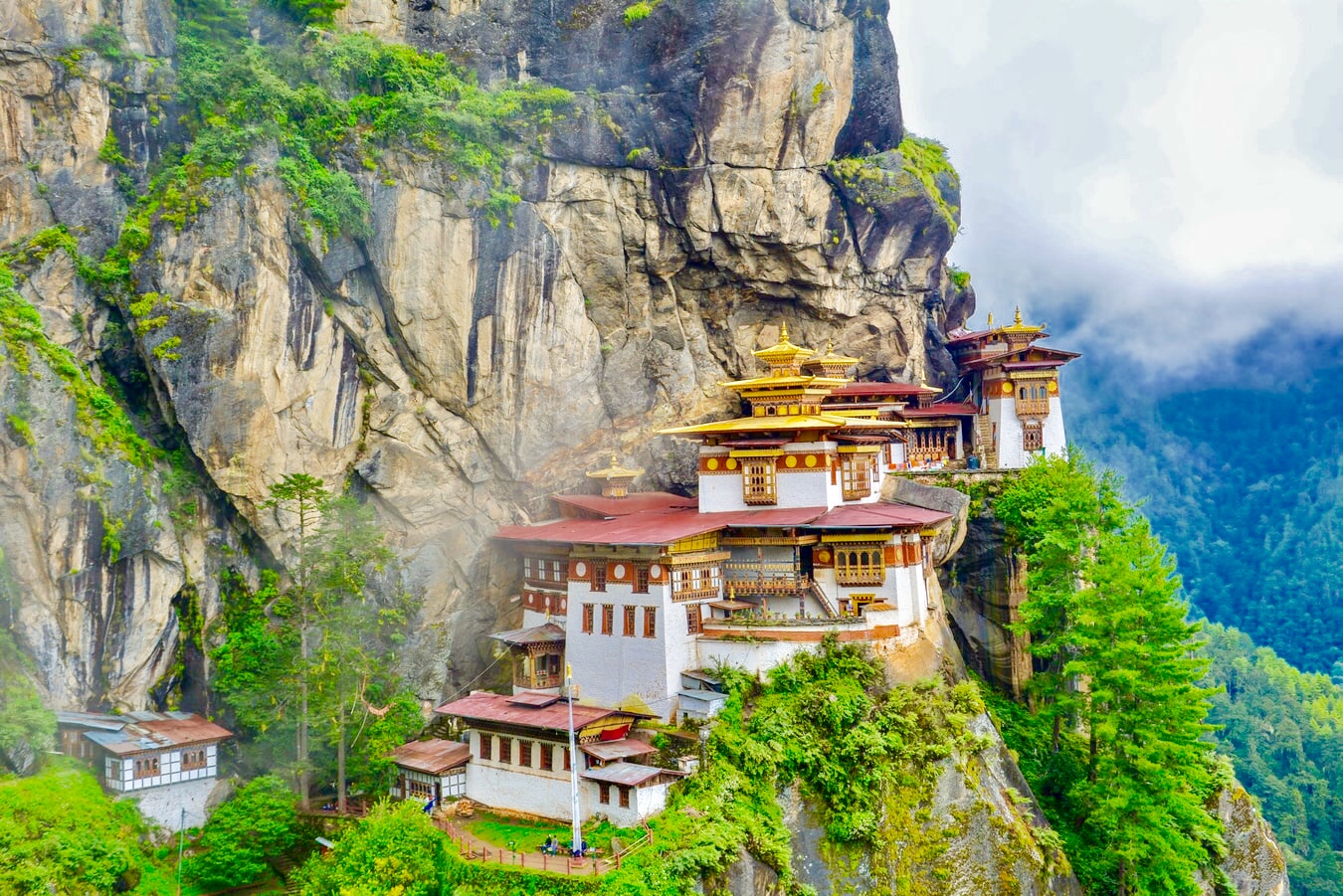 After a hearty breakfast in the jaw dropping landscape, it is time to either head straight back into the valley or linger awhile soaking up the view and perhaps hang some prayer flags of our own. Eventually we have to drop back into the ancient pine and rhododendron forest on the monks’ zig zagging trail. After 1-2 hours of descent we catch glimpses of the golden roofs of temples below and soon come upon the first of many on our way back from the wilds.

The path snakes across the mountainside between the monasteries and temples before reaching the gardens of Sangtopelri (Heaven on Earth) from which you can bravely peer over edge and straight down onto the ornate roofs Taktsang in the cliff far below. An hour later and we are at the gates of Taktsang looking across the gorge a steep descent to a waterfall then ascent on steps and you are passing into the Tiger’s Nest itself.

Taktsang Monastery (or Tiger’s Nest) is the most recognisable sites in Bhutan. Built precariously on a hillside cliff, it sits more than 10,000 feet above sea level. Accessible only by foot, we follow a trail decorated with colourful prayer flags along the way to protect travellers from evil spirits. Built over the caves that Guru Padmasambhava meditated in for three years, this eighth-century father of Bhutan Buddhism is said to have been brought there on the back of a tigress. One of the most sacred sites in Bhutan it offers breathtaking views to those energetic enough to make it to the top.

Today we will bid fond farewell to this beautiful Himalayan country. We hope by now you would have made some friends and also kept many photos and beautiful memories of Bhutan! And we look forward to seeing you again in this beautiful land of endless Enchantments! Tashi Delek!

Active trekking/walking days of this tour: 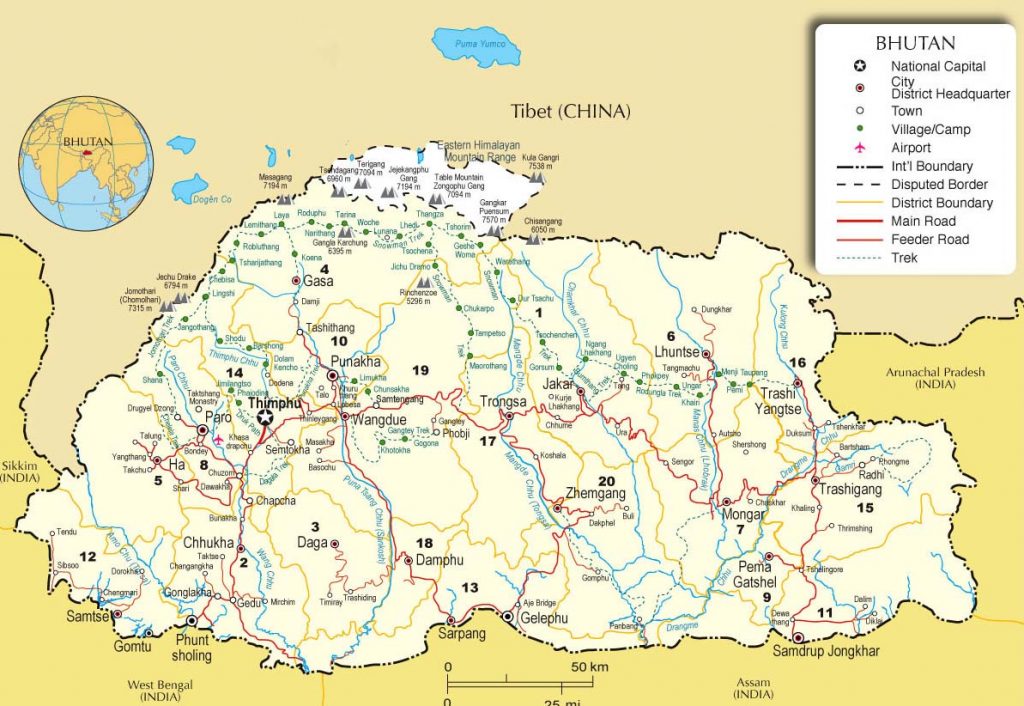